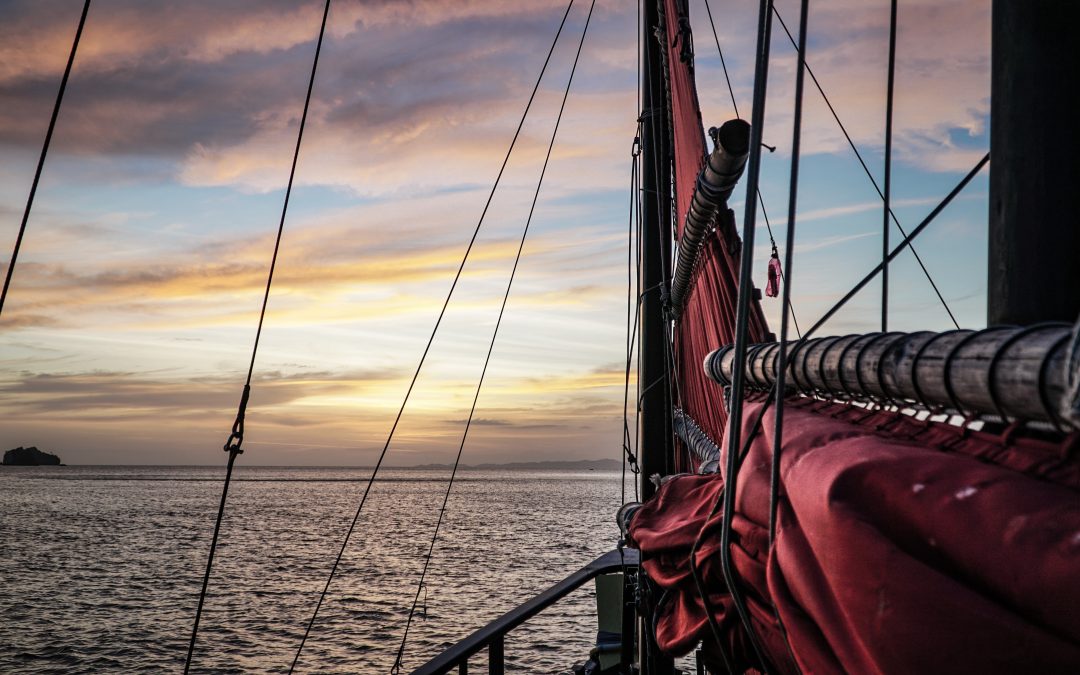 I’m currently in writing mode on my Bounty Hunter novel so I thought I’d take this week to share one of my favorite short stories with you!

Last fall, we wrote around a dozen short stories and were invited to submit one to the school’s quarterly contest. The theme was “Unexpected Beginnings” and could be no longer than 1,000 words.

To my surprise, I won the contest! And my story was even shared on the SOKW website!

So, without further ado, I’d like to present to you…

Sandra Collins gazed up at the ship’s bow, unsure whether this was a good idea or not. Two women dressed in sailor’s garb walked by carrying a large wooden trunk between them. Multiple voices echoed across the dock causing Sandra’s nerves to raise even more. She took a deep breath before taking a step towards a woman in a red overcoat who was barking orders.

“Maria! The coffee isn’t going to load itself!” Her voice was loud above the din.

“Yes, Miss Dahlia.” A reply came from the group.

Sandra paused for a moment. The Dahlia woman noticed her before she could run away.

She pointed at Sandra. “You there! What business have you here?”

Sandra swallowed the lump of fear in her throat. The woman clenched her jaw then stalked to stand before Sandra.

“Do you need something?”

“I–um…” Sandra gripped the leather strap of her duffle which carried the entirety of her world.

“Well?” Miss Dahlia’s eyes bore into Sandra’s own. Blue and piercing. “I have no time for idle chatter so speak your mind.”

Sandra found what courage she had left and spoke. “I need a job.”

The woman, possibly a decade older than Sandra, peered at her like a predator observing its prey. She tilted her head to one side.

“Work. I–I need work and I was told the ship called The Blue Pearl was in need of more hands and…” Sandra paused.

Miss Dahlia clasped her hands behind her back. “And you were told The Blue Pearl is the only ship here run by women.”

Sandra nodded, a wave of relief washing over her.

Miss Dahlia’s eyes seemed to soften and her voice lowered. “What are you running away from?”

Heat rushed to Sandra’s face and she glanced down at the wooden planks beneath her leather-clad feet. She had sold her boots to buy her fare from her village home to this city.

Sandra shook her head and whispered. “Nothing.”

“Dear, everyone here is either running away from someone or something. Now, which is it?”

Sandra’s eyes burned but there were no more tears to shed. She had spent them all in the past week like her last coin this morning for a morsel of bread.

After a moment of silence, the woman sighed and turned on her heel. Sandra’s heart sank. She could feel the eyes of everyone nearby watching her.

She heard the woman’s boots pause and glanced up to see Miss Dahlia was looking over her shoulder.

“Follow me. You’re to meet the captain.” With that, she continued towards the large ship.

Sandra rushed forward to catch up. She nearly bumped into a woman carrying bundles of rope.

The woman huffed before moving on. Sandra finally caught up with Miss Dahlia at the gangplank. She followed her up, holding onto the rope railing as tight as possible. As she stepped onto the ship’s deck, Sandra saw a woman standing at the ship’s railing. Her hands clapped behind her back, dark hair falling in waves across her shoulders, hawk-like nose, piercing eyes watching every move on the dock below. She stood ram-rod straight, her feet planted about shoulder-width apart. She wore a white tunic beneath a red vest with gold lining, black pants tucked into black knee-high boots, and a black three-point hat with a large, red feather sticking out on the right side.

The captain looked up as Miss Dahlia made her way along the railing towards her.

“Miss Dahlia.” The captain smiled, softening her features. Her eyes darted to Sandra. “Who do I have the pleasure of meeting today?”

Miss Dahlia motioned for Sandra to introduce herself. Sandra stepped forward and made a small curtsey.

“Sandra Collins, madam captain. I am–”

“She is looking for work.” Miss Dahlia finished.

The captain and Dahlia exchanged a look between themselves before the captain focused on Sandra once more.

“Are you looking for work or purpose, Sandra Collins?” She tilted her chin upwards.

Sandra stared for a moment before asking, “What?”

Sandra’s eyes began to burn again but she managed to whisper, “I would like a purpose.”

The captain smiled and extended her hand. Sandra went to shake it but paused when she saw the dirt caking her own nails. The captain paid no mind and shook Sandra’s hand firmly.

“Welcome aboard The Blue Pearl, Sandra Collins. I am Captain Emily Takana.” She released Sandra’s hand and stepped back, glancing her over. “Let’s get you some worthy sea clothes, yes?”

What did you think??

I personally really enjoy this story and would love to expand it into a full novel one day. I mean, the idea of a ship run by lady pirates sounds like a dream come true to me!

Want to try your hand at a contest?? I’m sure you have a short story inside wanting to be shared with the world!

This quarter’s contest is themed “Mirror Image” and you’re welcome to interpret this however you like for your story.

Your story must be submitted by September 1st. Absolutely free to enter and this time there’s a bonus to winning!

For all the deets, check out the SOKW website.

Next week we’ll talk about Car Emergency Kits. Be sure to subscribe so you don’t miss out.